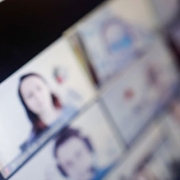 Interchange Outer East Inc. held its annual general meeting (AGM) at the end of October 2021. The AGM is held to present the Annual Report and the audited financial statement of the organisation for the previous year. At each AGM a new board is elected and the positions of chairperson, deputy chairperson, treasurer and secretary are appointed.
This AGM saw the retirement of four board members with a combined service of 30 years to IOE. They have retired from the board having supported IOE through the initial transition of the NDIS to a position of financial stability with a well defined sense of where the organisation is heading into the future and a strong commitment to the values and beliefs that underpin IOE.
The past year has seen significant debate and conjecture about how IOE should operate in the marketplace of the NDIS. With many for-profit organisations setting up to get access to NDIS funds and line their pockets, the debate has been about the extent to which IOE should become more business focused and competitive rather than continuing to operate as a mission and values led organisation.
The new IOE board is aiming to continue to pursue the mission of the organisation and the aims of the strategic plan. Whilst commercial considerations will need to be addressed in the NDIS marketplace they will not be the primary driving force. Mission, values and the commitment to provide quality service and support to families will be the priority as IOE negotiates the future. 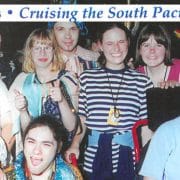 In the late 1990s I attended a wonderful recreation group for young adults with disabilities, through Interchange Outer East (IOE).

I was with Group 2 along with Ben, Karin, Bradley, Nicole, and Bronwyn. Occasionally we would combine with Group 1 who were Daniel, Travis, Naomi, Nikita, Paul, Tanya, and Shelly .

In many ways I think these groups were ahead of their time, being some of the first groups to promote and embrace social & community inclusion. This philosophy didn’t come in officially as an industry trend until the early 2000s.

Group 2 had two dynamic and selfless leaders, Belinda and John. John shared his name with a former Victorian Premier, and perhaps also he may have made an interesting politician. He could spin a yarn at the drop of a hat – luckily he hardly wore one!

John could talk about anything, from making terracotta pots in Bendigo, to the intricacies and beauty of Australian bird life (as in animals, not humans!). He is a retired army soldier who had a rich heart and a solid value system for the rights of the ‘under dog’. He could add great colour to epic tales. John was quite well read, with a diverse knowledge of country Victoria, and popular culture. I would often delight in calling John ‘Grandpa’ and would give him a invisible walking stick.

Belinda is a compassionate woman, who believes wholeheartedly in equality for people with disabilities – and told it like it was. She has extensive knowledge of the disability field, and is extremely well traveled.

Belinda placed great importance on the role of family, and sometimes reminded us of the roleour parents have in our lives. Looking back, I can see how one could underestimate the wisdom and knowledge of our parents and siblings in most families. IOE has always been big on reminding people of this. I think sometimes people with disabilities forget that the world doesn’t revolve around them.

I had already known some of the people in our group as they transitioned with me from a youth group run by IOE. Each person added their own unique flavour to the group dynamics.

Ben – Lewis Carroll eat your heart out! Ben would often let out massive quantities of methane gas in the bus Friday nights! He would dance his heart out at the pub on a Saturday, and often say “Look in my eye. What do you see ?” I thought this was quite profound, as it forces the other person to look at who he really is. He would also say “Good night world”, and wake people up 15 hours before sunrise! I know this from sharing cabins with him on many camps.

Karin – Karin would often “take a ride on the wild side…” apologies to Lou Reed . She made sure she was having a good time, and letting her hair down (or up).

Bradley – There was Bradley who often insist on buying everyone else a 30 cent McDonald’s cone, even if we slap bang in the middle of a field of cows, nowhere near McDonalds. He liked to talk about God, and his devotion to the Hawks football club.

Bronwyn – enjoyed checking out the guys, and took on a nurturing role towards everyone else in the group. She has a great zest for life.

Nicole – liked to party, party, party! And also enjoyed checking out the boys with Bronwyn. Nicole was incredibly social and friendly..

Last of all, there was me! Who would often play the court jester, so I could mask my social insecurities, and would laugh spontaneously. Group 2 reminded me about tolerance towards others. It helped me orientate myself in unfamiliar areas, and widen my interest beyond music and movies. It helped me grow and evolve as a more mature person.

Some of my highlights during my years with the group were – having my first beer at age 17 (apologies to the police), going on a joy flight over Mildura, a speed boat ride with the wind sailing through my hair and watching the water rippling past, walking over to Seal Rocks  at Phillip Island in my manual wheelchair, and then John carrying me up the stairs to the rocks (breaking several OHS rules – oops!), 4 wheel driving at Yaark with it’s beautiful bushland, seeing Bicentennial Man the movie at Crown Casino and pissing my pants with laughter at Robin Williams brilliant portrayal of a robot with human emotions. At the time one of the quotes from the movie resonated with me “You can’t invest your emotions in a machine”. Some other activities I enjoyed were a gender-bender theme night on a P&O cruise, and walking through snow in Mansfield.

All these memories are engraved upon my heart forever.

I am thankful to this group.

Joel has dedicated this article to Travis, sadly no longer with us but remembered with great fondness by all who knew him. 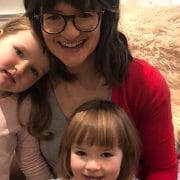 Interchange Outer East’s hosting program brought together hosts, Jo, Trevor and their family and eight year old Indianna.  A lovely friendship has developed with Indi fitting right in with her host family. The following article was recently  published in the Eastern Volunteers newsletter.

‘Jo and her family have been hosting Indi for around a year, allowing the two families to build a friendship. ‘The girls will go off and play and we’ll sit and talk for hours,’ Jo said of the times that Indi is dropped off for the weekend.

Being a couple of years older than Jo and Trevor’s eldest daughter, Florence, Indi has taken to the big sister role naturally. When she grows out of her dress ups she hands them down for Florence and Olive, Jo and Trevor’s younger daughter, to enjoy.  She generously buys gifts with her tooth fairy money and plays with the girls when Jo takes time out for baby Herbie.

Jo says that Indi is very comfortable in their home, as is Indi’s brother Zac who is always welcome too.

“Indianna loves going to play with the girls. Her eyes light up when we ask if she would like to go visit the girls and Herbie. We love Trevor and Jo too. They are very open and friendly and they have helped us out so much.” – Jodi, Indi’s mum.

While it can be difficult for the two busy families to find time to catch up, there is no pressure and both families are happy to remain flexible to keep the connection going as the children grow.

Hosting is for everyone; singles, couples, families. It’s volunteering with a difference that makes a difference!’

Hosting opportunities are very flexible and can range from sharing a few hours with a young person with a disability to a  full weekend of support.   Hosts take on a variety of roles from second family, to mentor, friend or buddy who shares interests and experiences with the young person.

If you would like to find out more about how you can be a part of Interchange Outer East’s hosting program please contact 0397585522  or email hosts@ioe.org.au

We look forward to hearing from you! 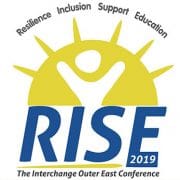 Keep up-to-date. Read the latest news from IOE with the March edition of our monthly enewsletter. 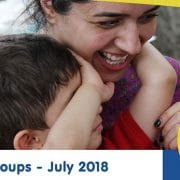 Keep up-to-date. Read the latest news from IOE with the June edition of our monthly enewsletter.