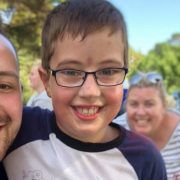 The extra support that 9 year old Isaac has had funded through his plan has made a huge difference to life for his whole family. As they have been using IOE programs for some time now and have been very happy with the agency it seemed natural to have IOE help them with support coordination.

Isaac has always enjoyed being part of IOE’s recreation programs – he loves the fun activities and particularly getting away for the weekend on camps. Being able to continue these activities was one the important needs that was factored into his plan and having all his support costs funded has meant he can achieve this goal.

Previously Isaac’s parents relied on a few short hours of council home support to give them very limited respite and assistance for Isaac. With the added 1:1 support they can finally have some time away for themselves while Isaac is being very capably supported at home.

Community access was also a stated aim but with Mum looking after Isaac and his siblings, (the youngest also has a disability) and Dad working weekends, opportunities to get out and about were rare. Now Isaac can head off with his support worker and indulge in his passion for all things ‘public transport’ – looking at and riding on trams, trains and buses. He is getting out and about and enjoying all the experiences and the growing independence that his extra support is enabling him to have. 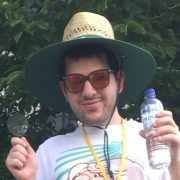 Through his NDIS package 23year old Chris is learning to become more independent, setting himself up for his life into the future.
One of the early rollout clients, Chris and his family have now had the chance to really experience the difference his NDIS plan has made. While the family opted for NDIA the look after the financial side of the plan, they nominated IOE to coordinate Chris’s supports and services from both IOE and other organisations.

Chris is still doing all the things he was before but with the added support he has been able to purchase he is now able to accomplish so much more. With a support worker now assisting him each afternoon, routines have been able to be put in place where he learns and practices those life skills he will need for a more independent life – personal care, cooking, organising, household tasks. He is also looking after his health and well-being by getting out and about in the community and getting regular exercise.

A support worker accompanies Chris to his work experience one day a fortnight. His funding provides him with additional support to explore more options for employment – like most young adults his age, work is one of his goals.

The funding of an O.T. has been a huge bonus for the family. She has been an ‘absolutely wonderful’ (quote from Mum!) hands on asset and has helped to put Chris’s afternoon routines in place and organised much needed, but previously unaffordable, home modifications.
Chris’s Mum, Linda, says she has seen Chris grow in happiness and confidence as he becomes more independent and less reliant on her. He now has his own future firmly in his sights thanks to the NDIS.