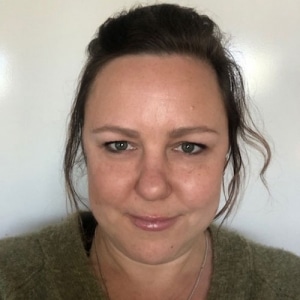 Starting at Interchange Outer East as a volunteer in year 10 for a school project, Karina is one of our longest serving current staff members, having been with us now for nearly 25 years! Karina continued to volunteer over the years and signed up as a support worker as soon as she turned 18. Despite a short stint at university studying nursing, Karina knew she had found her calling at IOE and put nursing on the back burner permanently.

Karina was part of the Balance program from its inception, now known as our adult day service, and spent years later coordinating Balance groups as well as adult recreation groups. Moving permanently into recreation, Karina has spent time coordinating School Holiday Program, developing the 10 – 13 Rec Program, developed the St George High Energy and High Physical programs, ACTIV8 outreach and Wimmera Programs before moving onto a development role focussing on streamlining adult and children’s recreation services and following a restructure in 2019. In between these roles, and taking time off after the birth of her two children, Marlie and Mason, Karina has worked within behaviour support and policy development before moving into the team leader role within the Recreation Services Team as part of the new hub model adopted at IOE.

Being part of an organisation like IOE for over 20 years has had a huge impact on Karina’s life. From supporting people in her home, to meeting her husband at work and to the lifelong friendships made. She absolutely loves her job and could not imagine working anywhere else as she thrives in the environment where she feels so supported while being able to support others.

Karina has loved being a part of IOE’s development throughout the years and looks forward to the challenges we tackle to strive to be a better organisation every day. When she is not work at work, Karina enjoys spending time with her family and friends, cooking, fishing and being out on the water.